One of North York’s best fine dining restaurants, Auberge du Pommier exudes a quiet confidence, reflecting our commitment to culinary excellence and inspired service. Our cuisine is traditional French, with innovative North American influences, and our seasonal menus are elegant and genuine celebrations of fine food.

Constructed around the rustic vestiges of two 1860’s woodcutters’ cottages, Auberge du Pommier combines country charm with contemporary sophistication and style. Featuring wood burning fireplaces in winter and lush, floral terraces in summer, it is a welcoming, refined retreat from the city.

The original jewel in the Oliver & Bonacini crown and a North Toronto icon, Auberge du Pommier has been serving guests since 1987. 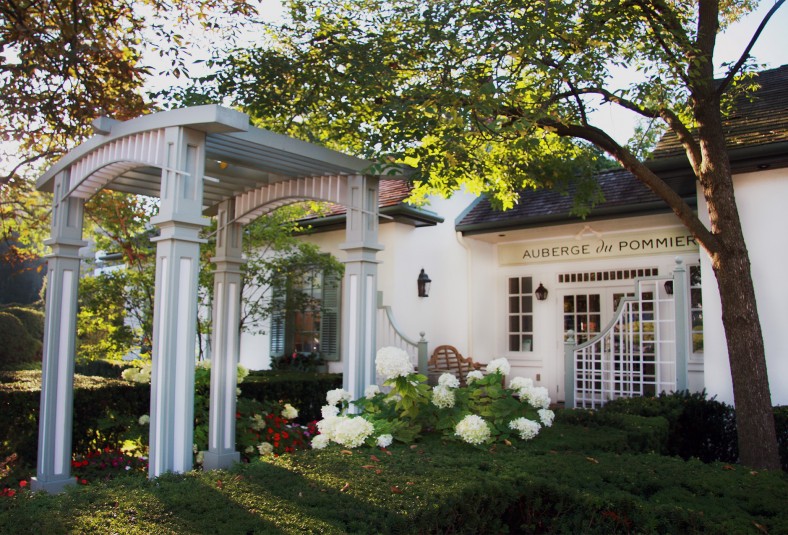 Scratch cooking using fresh, garden-grown ingredients has always been in Chef Tim Schulte’s blood. After a childhood in Germany spent sitting around the dining table with family at every meal, Tim used his grade 8 internship as an opportunity to dip his toes into the restaurant world. From there, there was simply no turning back.

Before embarking across the Atlantic, Chef Tim worked under German celebrity chef Tim Mälzer at Bullerei, an unconventionally hip slaughterhouse-turned-restaurant in Hamburg. Soon enough, he found himself on Canada’s scenic west coast, cooking alongside Michelin-starred Chef Stefan Hartmann at the acclaimed Bauhaus Restaurant in Vancouver. After securing the modern German restaurant a coveted spot on the Diners Club’s “World’s 50 Best Restaurants,” Chef Tim ascended to the role of Head Chef, where he remained for the next two years. During this time, he invited culinary heavyweights like Michelin-starred Chef Sascha Stemberg and three Michelin-starred legend Harald Wohlfahrt to partake in creative, palate-popping collaborations.

Between his stints in Vancouver and Toronto, Chef Tim picked up and journeyed halfway around the world, where he spent a year cooking in Melbourne and opening Sydney Harbour’s renowned 12-Micron. Now, as Chef de Cuisine at Auberge du Pommier, he is excited not only to spend his days in a cozy environment that reminds him of his family cottage in Germany, but to work in the company of seasoned O&B chefs and play with both local and international ingredients — creating simple, flavourful plates that are diverse in texture and colour.

As a strong advocate for balance — both on the palate and outside of the kitchen — Chef Tim spends his free time breathing in fresh outdoor air while golfing or fishing.

Please Note: Due to provincial regulations, we are temporarily closed. We look forward to welcoming you back soon.